What I Teach My Son When I Say I Am Fat

I saw this great article going around Facebook again this week called When Your Mother Says She's Fat by Kasey Edwards. It is a letter by Edwards to her Mom about what she learned from her mother when her mother insulted herself due to her weight. What Edwards learned struck a cord for me and the many women who have been sharing this article because these are the same things we learned from our own beautiful mothers who never thought that they were beautiful

As the mother of a boy, I then thought about what mothers teach their sons when we speak badly about our own weight and appearance.

What particularly struck me in Edwards' article is where she writes that as a child she looked forward to the day when she would be like her mother, until:


"But all of that changed when, one night, we were dressed up for a party and you said to me, ‘‘Look at you, so thin, beautiful and lovely. And look at me, fat, ugly and horrible.’’

At first I didn’t understand what you meant.

‘‘You’re not fat,’’ I said earnestly and innocently, and you replied, ‘‘Yes I am, darling. I’ve always been fat; even as a child.’’
In the days that followed I had some painful revelations that have shaped my whole life. I learned that:
1. You must be fat because mothers don’t lie.
2. Fat is ugly and horrible.
3. When I grow up I’ll look like you and therefore I will be fat, ugly and horrible too."

In that article I heard two voices from my own life.

I heard my own voice, just a few weeks ago when I was talking to my husband, in front of my son, about going to my husband's annual Christmas party. I told my husband: "I don't want to go. I am fat, disgusting, and you deserve someone who looks good like you."

I heard my son's voice who so often has said "No Mommy, you are pretty" at the many times I have made comments like I did about this Christmas party.

I bet almost daily I say something negative about the way I look and I know my son hears it. It has become a daily part of my life, natural for me. As natural as the girls in grade school who told me I had to be at the bottom of the pyramid because I was so fat the rest of them could not hold me up. As natural as the people who made fun of me for having fat legs. As natural as the people who told my husband when we were dating that I was not pretty enough for him. It seems totally normal to me to feel required to never let myself forget that I am fat and ugly.

The comment I made to my husband about the Christmas party- "I don't want to go. I am fat, disgusting, and you deserve someone who looks good like you," told my son a lot about me, about himself, about his father, and about women in general.

These are the potential lessons I taught my son that day:
Since this type of body hatred is so normal for me, I do not even realize I am doing it. It was not until I saw this graphic going around Facebook today that I realized how often, every day, and every year, I talk about my weight and how much I hate my body. This comes from a Facebook page called Grrrl: 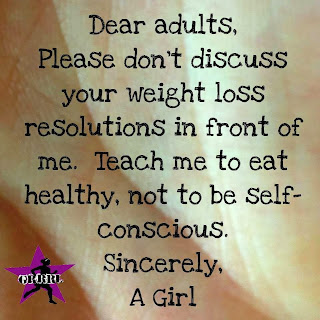 So, rather than resolving to loose weight again this year I resolve to not talk about weight loss or worth being attached to weight and looks in front of my son. Eventually I want to never talk about it to anyone again, but I know I am not able to do that yet. However, I can take the step now to not expose my son to seeing his own mother hate herself because of her weight.

P.S. After I wrote this post, I took a break to have dinner with my family and noticed that in order to follow through on this resolution I already had to stop myself from saying things I typically would have said before. Such as "I can't believe I ate that much. I should stop eating because I ate too much already today. I feel disgusting that I ate this."

Also, I should add that "fat" is not in itself a bad word. When we add qualifiers to it like "disgusting," or when we use it in a negative way, that is when it becomes a problem.
Posted by Rev. Katie Norris at 8:53 PM